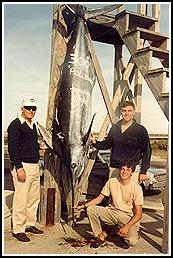 Captain Krage Gardiner is no stranger to bring in the big ones.

Captain Krage Gardiner grew up in Greenville, North Carolina, 2.5 hours from Nags Head. As a young boy he went fishing every chance he got. Fishing mostly ponds, small lakes and the Tar River.

His first offshore trip was out of Oregon Inlet Fishing Center at the age of seven. From that summer on, Captain Krage knew what he wanted to do when he grew up. During the summer breaks from high school, he took advantage of opportunities to mate on private boats. The day after graduating high school, he moved to the Outer Banks and landed a job as a mate on a charter boat.

His first charter boat job was out of Oregon Inlet Fishing Center aboard the Outlaw with Captain Mike Spencer. The following year he teamed with Captain Nevin Wescott aboard the Wildfire. They had 3 great seasons together filling the box with big tuna.

The next year Krage joined Captain Steve Daniels aboard the Temptation. Marlin were Steve’s specialty. Krage finished his mating career fishing 14 seasons with Captain Buddy Cannady aboard the Captain BC. 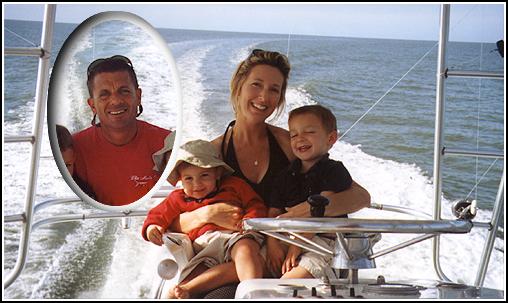 Captain Krage with with Heather and sons, Chase and Taylor.

In 1991, Krage was voted “Mate of the Year” by his peers. Krage has been a licensed captain since 1986. In 2000, he purchased the Fin Galley and began his charter business out of Oregon Inlet Fishing Center.

Captain Krage makes his home in Manteo, North Carolina with his wife, Heather, who works as a registered nurse and his three children Chase, Taylor, and Ella. 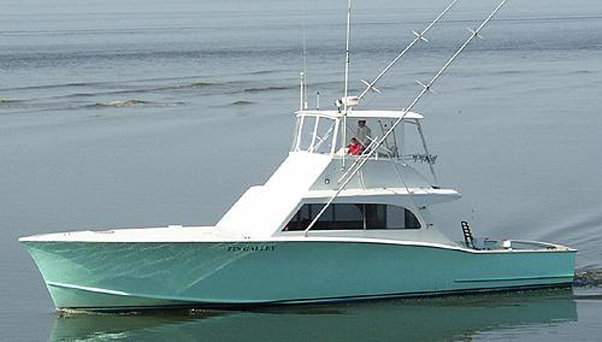 The Fin Galley is a 50 foot Carolina Sportfisher built by local boat builder and charterboat captain Sheldon Midgette. Her stout construction, deep V and sharp entry makes for a very sea-worthy boat and will insure you a comfortable ride to the Gulfstream.

The Fin Galley is powered by a 3406 Caterpillar engine producing 800 horsepower and will allow us a 22knot cruise. She has a large salon with three bunks and a bathroom down below. The spacious cockpit boasts a large center fighting chair and two additional fighting chairs.  Stand up belts are also available as an option.

The Fin Galley has built in bait and ice boxes against the bulkhead which may also be used for seats to get out of the sun and still be in the cockpit. A six hundred pound insulated fish box is located in the stern to keep the days catch fresh while we “bring ‘em home”

On the bridge, Captain Krage has what it takes to put you on the fish. Electronics include Radar, GPS, Loran Plotter, Color Fish Finders and VHF radios.